As young and eager type A surgical residents, we were all told this story to rein in our horses. Most surgical oncologists must have heard some or the other version of it. Here’s the version I heard – there was this young surgical registrar who was performing a total esophagectomy and realised that the oesophageal lesion was locally advanced and probably inoperable. He called in his lecturer who after a long battle managed to remove the tumour and left the OT with a swagger, believing he had done a good job. The next time, this lecturer was in trouble and the Assistant professor had to step in to rescue him and remove the tumour.

This same incident repeated with the Assistant professor and the HOD had to step in. The resident felt that he had a long way to go, which he did, but at the end of one year – all the patients were dead from a recurrence.

Moral of the story:

But as you grow older and wiser, you realize that this philosophy is regressive and deters evolution of surgical techniques. Take the case of Liver surgery for colorectal liver metastases (CRLM). In the 1980s and 90s, there were stringent selection criteria for consideration for a liver resection – <4 lesions, confined to one lobe, <5cm size and absence of extra-hepatic disease. But this was in the era before doublet chemotherapies like FOLFOX or FOLFIRI, which we now know are far superior to then existent chemotherapy options. Then came the era of biological therapy, which in combination with optimal chemotherapy gives responses that even converted initially inoperable CRLM to operable in 20% cases. And this changed the landscape of surgery for CRLM.

But was it only the chemotherapy and biological therapy that made the difference? Had it not been for curious and adventurous surgeons who wanted to push the envelope this wouldn’t have been possible. We now have surgical strategies like 2-stage liver resection in combination with portal vein embolisation, liver-first approach, ALPPS, intra-operative ultrasound (IOUS) guided liver surgery, and indeed liver transplantation for inoperable liver metastases. And all ancillary modalities have developed around these adventurous surgeons. Which is why we now have better and safer anaesthesia, highly accomplished interventional radiologists, better energy devices, sophisticated intra-operative imaging techniques and better post-operative care units.

Of course, these surgeons who think differently and challenge dogmas need the support of their colleagues, medical oncologists, interventional and conventional radiologists; and indeed their institutions to do the research, develop protocols, get ethics committee approval, perform these challenging surgeries, and ensure good outcomes. Over the last 3 decades, treatment of CRLM has become a sub-specialty in itself and more and more studies have pointed out the importance of concentrating these cases in highly specialized units to ensure better outcomes.

Our own experience has shown a trend towards shorter hospital stay and better post-operative outcomes with the adoption of IOUS and parenchyma-sparing liver surgery. In this treatment strategy, we use the latest devices in intra-operative imaging (HITACHI ALOKA ARRIETA 70 with the micro-convex echo probe for open surgeries and 4-directional Laparoscopic probe for laparoscopic surgeries) to mark out the anatomical landmarks and the exact locations of the liver lesions in relation to these structures. Based on pre-operative imaging and volumetric studies along with intra-operative IOUS findings, a 3D map of the liver to be resected can be envisaged and a highly precise resection is performed to remove all the CRLM while preserving as much of the normal liver parenchyma as possible along with its portal supply and venous drainage. Often, the challenge in extensive liver metastases is the preservation of adequate venous drainage; IOUS guided flow analysis helps in the detection of collateral communications among hepatic veins that helps tailor the hepatic  resections beyond the standard segmentectomies, sectionectomies and hemihepatectomies. 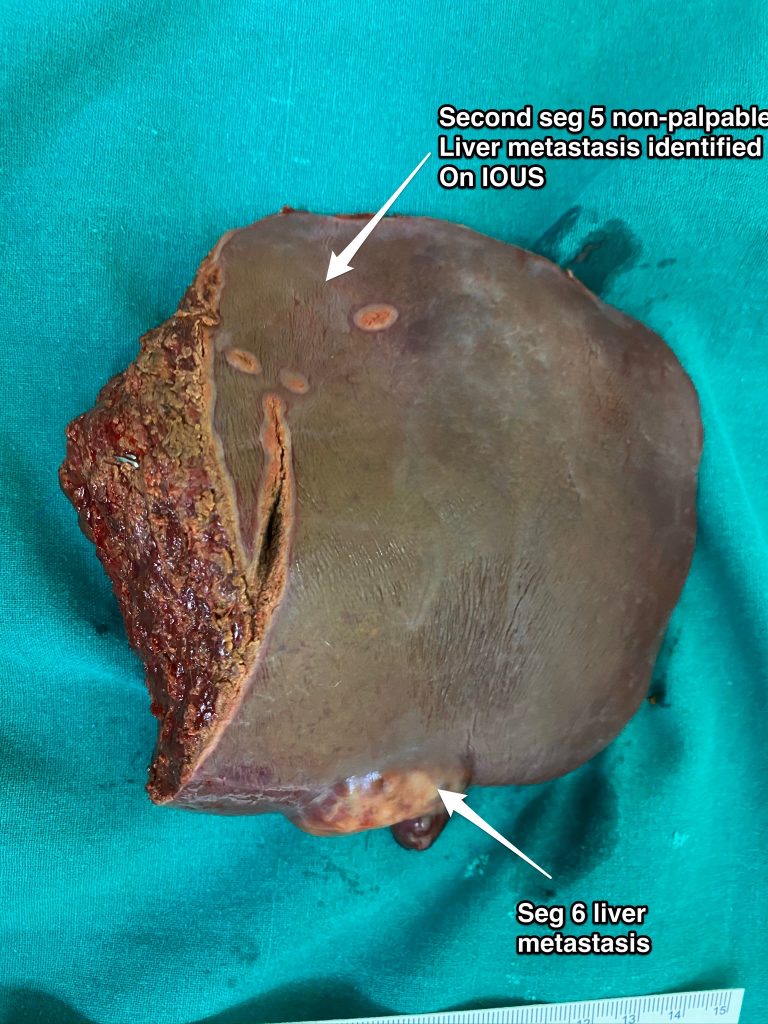 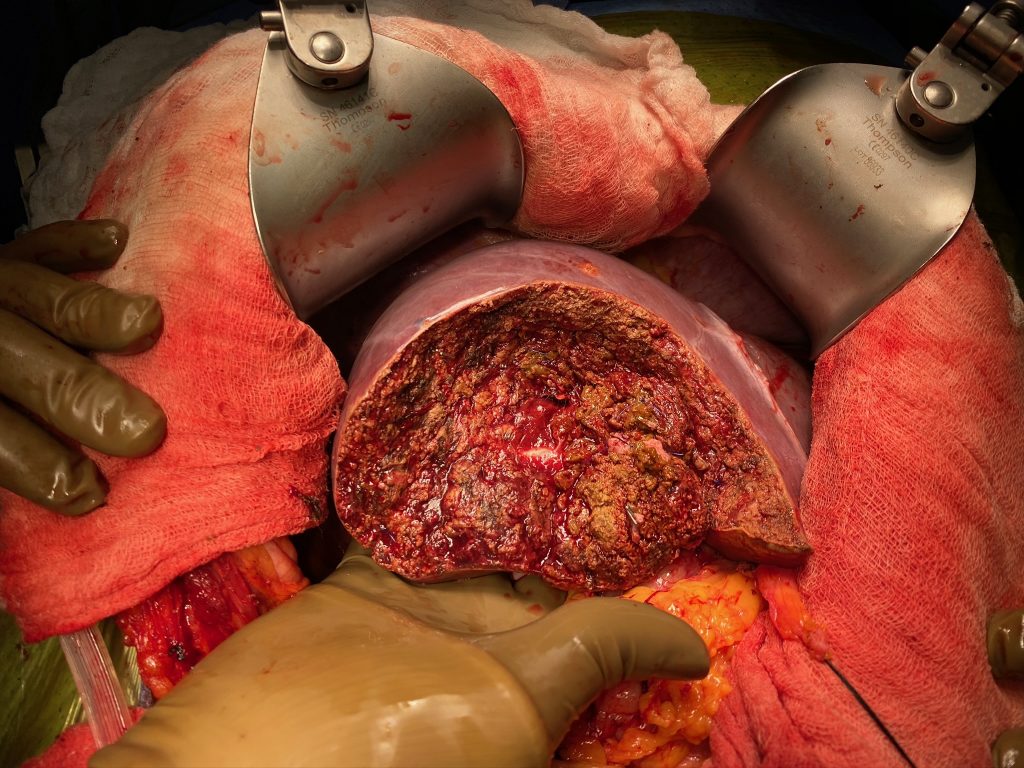 Fig. 1A and 1B – Lesion in seg 6 and another non-palpable lesion in segment 5. In the absence of IOUS, it would involve a formal set 5 resection but with IOUS, a contiguous resection can be performed with adequate margins without sacrificing additional normal liver parenchyma

Fig 2A – IOUS identifying 3 lesions straddling segments 7,8 above the plane of the hepatic veins

Fig 2B – Resection performed under IOUS guidance to resect segments 7 and 8 above the plane of the hepatic veins to encompass the 3 liver metastases. An additional small liver metastasis identified in segment 6 was removed separately 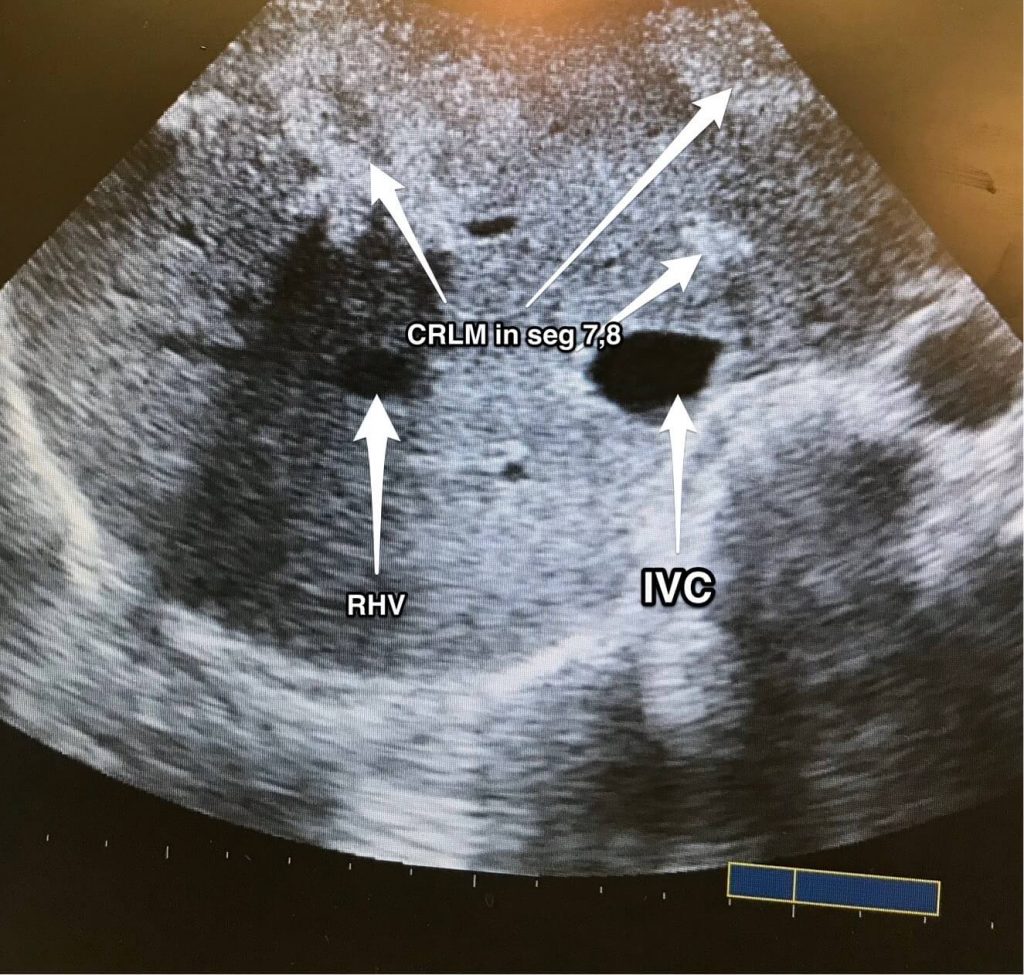 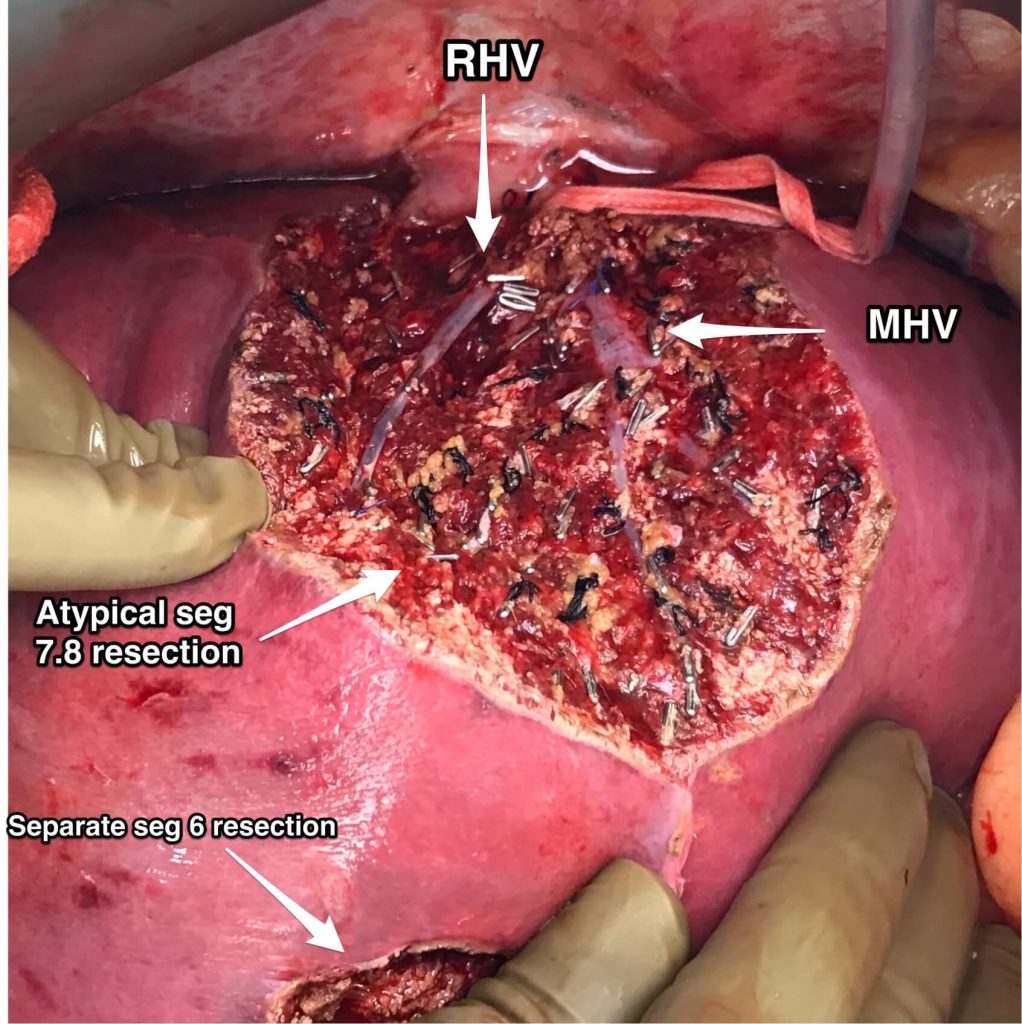 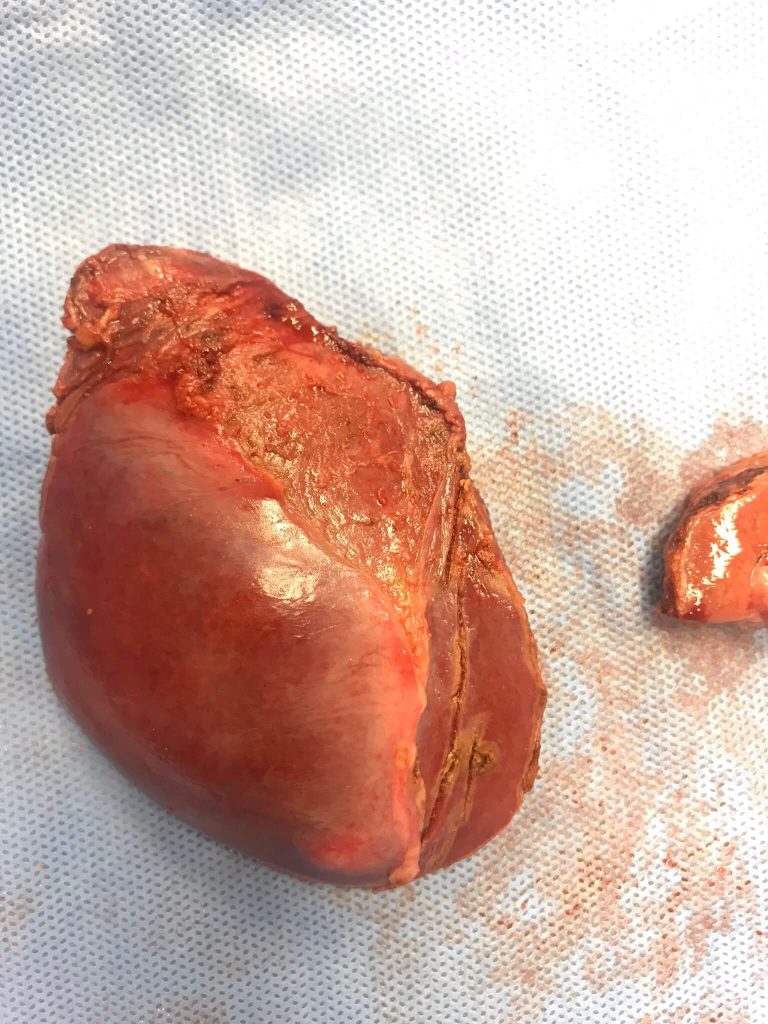 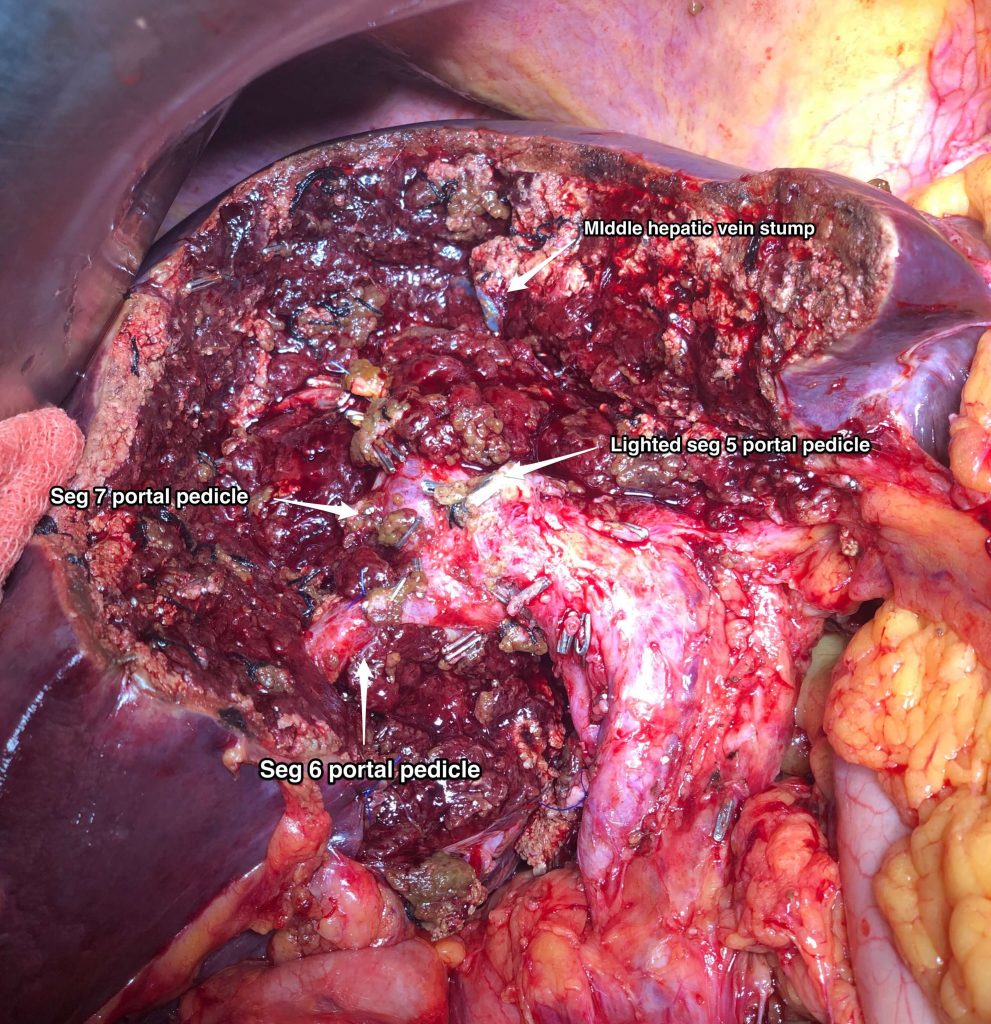 Fig 3 - A precise resection of seg 4B, 5, 8p done under IOUS guidance to resect large CRLM in close relation to the right portal pedicle